The protagonism of emotion in decision making

The protagonism of emotion in decision making

Daniel Shapiro and Roger Fisher, both from Harvard Law School's Negotiation Project, put emotion as a 'background' to the negotiations when they wrote Beyond Reason: the power of emotion in conflict resolution (Beyond Reason: using emotions as you negotiate). In the work, the authors show us that emotions can be part of the turning point (tipping point) to transform personal or professional dissent into opportunities for collaboration and building mutually beneficial solutions.

In fact, we are surrounded by experts that relate emotion to decision making, leaving reason in a secondary plane. Today, quite grounded by neuroscience, some authors assure us that to ignore emotion as a permanent component of negotiations means to ignore its element most essential.

Em Negotiating the nonnegotiable: how to resolve your most emotionally charged conflicts - Negotiating the non-negotiable: how to resolve your most emotionally charged conflicts), Shapiro speaks to us of invisible emotional forces that attract us to impasses, and offers management possibilities to overcome them. In the first part of the book - Why do we get stuck in conflict -, the author invites us to reflect on the nature of the emotion that imprisons us in a given conflict, reaffirming the role of this important element in decision making.

What emotions trap you?

For Shapiro, some relationships can consume us emotionally because of their impact on our psyche. This can cause repetitive patterns of behavior, preventing us from cooperating with each other. It also reduces our capacity for reflection and leaves us stagnant in negative aspects of history.

For the author, other themes also burden conflicts in such a way that they risk negotiation to paralysis. Examples include:

(I) perceived threat to identity - not feeling belonging or not having one's existence validated by another person can sharpen the need for self-defense, stiffening antagonistic positions and hostile attitudes.

(Ii) revisiting emotions that caused a lot of pain - the possibility of reliving emotions that bring suffering makes us, in an unconscious way, recreate conditions that produce recurring conflicts. For the author, this compulsion for repetition is a pattern that, paradoxically, is born out of the fear of reopening the “pandora box” of emotions, which we prefer to keep under lock and key.

(Iii) violation of sacred values - there are sacred beliefs (some religious and socio-cultural convictions), sacred alliances (certain relational and political loyalties) and sacred values ​​(such as trust and respect), which are intangible and untouchable values. The challenge here is to respect what is sacred to each side.

Emotional wounds are unconscious and we are hypervigilant so that they are not revived, reacting in different protective ways.

What would be the management tips?

Motivated by the idea that very emotional conflicts are difficult to manage, Shapiro chooses to create bridges (connection) between what divides and what approaches the line that harmonizes significant differences. Always taking care that there are no winners or losers, and that none of the actors need to manage a feeling of minus worth the table.

The author believes that just bringing the different interests (Harvard trading school icon) into the dialogue would be insufficient, when paralyzing emotions integrate the relationship between negotiators or affect one side.

He suggests some ways of guiding themes that are part of contexts filled with emotions of a trapping nature:

(i) validating the other's perspective: as highlighted by Shapiro, giving authenticity to what everyone brings to the table is the first step on the path of (re) approximation.

(Ii) legitimizing the identity of all: the acceptance of differences and the absence of judgments favors an empathetic understanding of the other's existence - considering their particular characteristics - and helps in the (re) connection of negotiators.

(iii) self-implementation: in the book, Shapiro gives us small spreadsheets questions for negotiation clients, which strategically induce reflection (think about it), self-awareness (how you react when which also makes it reactive).

They are practical guides to identify how much a certain emotion impacts the negotiation, and how fundamental this element is for the conduct of the mediation.

(Iv) recognition of emotional losses and pains: in negotiation contexts, which involves, as a rule, feelings of loss, threats of injury and emotional pain, recognizing them brings relationships closer, favors listening and restores interaction, aiming at decision making.

(V) Inclusion of forgiveness and the apology: here I remembered two more books: Forgiveness, by Dr. Fred Luskin (Forgive for Good: a proven prescription for Health and Happiness), for whom forgiveness does not mean erasing what has happened, but not allowing it to be carried over day after day, taking away our physical and / or mental health; and On Apology, by Aaron Lazare, for whom the apology does not mean a manifestation of weakness, but each or all of the senses of the Greek word: justification, explanation, defense, excuses. Or yet, I didn't know it was important to you.

To close our conversation, I leave the message that I believe prevails in Negotiating the Non-Negotiable: reestablishing the connection of the relations is the best way to avoid revanchist stances and the escalation of the conflict. 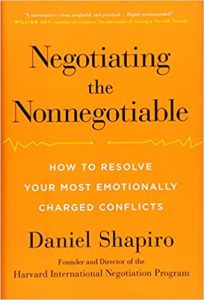 Negotiating the nonnegotiable: how to resolve your most emotionally charged conflicts, by Daniel Shapiro
Viking Publisher, 2016
336 pages

Meet you in the next Read with me, when we will talk about Appreciative Inquiry: a positive approach to change management, by David Cooperrider and Diana Whitney. Until then!

* Tania Almeida - Master in Conflict Mediation and Facilitator of Dialogues between individuals and / or legal entities. For 40 years, it has been designing and coordinating dialogue processes aimed at mapping, crisis prevention, change management and conflict resolution. She is the creator and founder of the MEDIARE System, a set of three entities dedicated to dialogue - research, service provision, education and social projects.

This website uses cookies to improve your browsing experience. Cookies categorized as necessary are stored in your browser, as they are essential for the basic functionality of the website. We also use third-party cookies, which help us analyze and understand how you use this site. These cookies will be stored in your browser only with your consent. You also have the option to cancel these cookies. However, disabling some of them may affect your browsing experience.
Required Always activated

Performance cookies are used to understand and analyze the main performance indexes of the website, which helps to provide a better user experience for visitors.

Analytical cookies are used to understand how visitors interact with the website. These cookies help provide information about the metrics of number of visitors, bounce rate, traffic source, etc.

Advertising cookies are used to provide visitors with relevant advertising and marketing campaigns. These cookies track visitors on websites and collect information to provide personalized ads.

Other non-categorized cookies are those that are being analyzed and have not yet been classified into a category.

SAVE AND OIL
Go to Top