The first edition of 'Negotiating at an Uneven Table: A Practical Approach to Working with Difference and Diversity'- “Negotiating at an unbalanced table: a practical approach to work with difference and diversity” dates from 1994, a time when Phyllis Beck Kritek was already in the area of ​​training in dispute resolution, articulating communication with leadership and gender.

In the book, the author is dedicated to sharing attitudes that can constructively address the lack of equity and diversity at a negotiating table. Without exhausting the topic, Phyllis progressively moves through: (i) business contexts of apparent unbalance and (ii) approaches traditionally used in negotiations of this nature, until leading us to (iii) constructive management of unbalanced tables.

Classical imbalances - hierarchical, for example - are apparent and easily perceived - but some situations of imbalance can go unnoticed and have unfavorable translations in the results of a negotiation, if not worked properly during its course.

Phyllis's ultimate intention is to share attitudes that negotiators can adopt to deal with unbalanced tables. The concept of unbalance it is metaphorical, and speaks of the absence of equity, of imbalance in some or several aspects that involve negotiation.

The natural imbalances of business contexts

The author begins the work, addressing aspects inherent to the contexts of dialogue:

(i) each one will have a different version of the object / event that motivates the conversation, based on their own social construction - that builds prejudices, pros and cons, and emphasizes or minimizes aspects or issues brought to the table;

A parenthesis should be mentioned here to mention that the exercise of power in an interaction alternates between the participants, and that the dispute for power will always be present. The philosopher Michel Foucault told us that the question to be invariably asked would be "How is power being managed in each relationship?" And I would add: at a certain time.

I mention as a warning that our perception tends to focus on more classic forms of exercising power (boss / employee, boss / team) and is less sensitive to how fragile positions can exert enormous control in a relationship and in a negotiation. Fragility can be a relevant currency for the exercise of power.

In addition to the ingredients brought by Phyllis to a negotiating context, we would need to consider that there will always be natural imbalances at a conversation table: in the form of communication, in the negotiating skills, in what may culturally seem more appropriate or not, more reasonable or not. In other words, there are no naturally balanced tables in a negotiation. Negotiating is a complex process that places a diversity of cultural, personal, relational, material and immaterial aspects in the field and in conversation.

In this direction, lying, betrayal, cheating, the deliberate construction of dead ends, cynicism, attack and the proposals that distract the other may be present in old negotiation models, visibly unbalancing the table.

In Phyllis's text, however, there is also mention of a number of masked manipulation features (masks of manipulation), which may present themselves consciously or unconsciously. The list goes through praise, flattery, kindness, generosity, reverence, flirting and reaches the emotional numbness that makes the other hostage, in addition to the projection - putting in the other aspects that belong to the one who projects - all of them, attitudes that may go unnoticed by those it is part of a negotiation, and I would say, by the third facilitator of a dialogue.

The writer Phyllis Beck Kritek says that improving skills (skills) does not transform people or relationships, something more is needed. It reinforces this idea by ensuring that there are no simple answers to complex situations and that the changes need to be organic. And in this line, it speaks of individual transformations in the way of understanding and viewing situations in general, in addition to the issues negotiated. In other words, in each of us there would be a set of resources that would favor dealing with diversity and unbalanced tables in a more systemic way - that would be something else, the systemic view of the situation (considering different factors in articulation and interdependence) and to get involved in handling the unbalance.

Phyllis draws attention to the bases of quantum physics that undo the idea of ​​an exempt observer and demonstrate that the object will always be described according to the place that each observer occupies: where are you, how do you look, what are you looking for, why and when you look, and how fast you look are elements that interfere with the description of objects and facts.

It evokes the physicist and philosopher Thomaz Kuhn and his idea of ​​paradigm - paradigm effect and paradigmatic paralysis - that turns the observer into a prisoner of his beliefs, insofar as he goes into the field to confirm hypotheses more than to identify the new with genuine curiosity. The notion of unique truth that the philosopher Immanuel Kant helped the world, especially the legal one, to believe, falls apart. The idea of ​​linear causality, demonstrating that our interventions act mechanically and directly on objects altering results, falls together.

Having knowledge about these aspects, present in the scenario where understandings and disagreements occur, is paramount. In this more complex scenario lies the perception of the legitimacy and admissibility of diversity and differences of all kinds. This admission substantially impacts the act of listening and its search for understanding the motivation, intentions and feelings of the other (compassion), and for identifying what is common, convergent and complementary, I would add.

“Communicating your own motivation, intentions and feelings, truly and clearly, as well as recognizing your own ambiguities expand the context and boundaries of conflict and conversation, more than being focused on an eventual imbalance, giving way to fear and apprehensions”

Be well informed about the topics to be dealt with in the negotiation - map what you know about and what you don't know -, learn from each other without being defensive, act with creativity and humor and, above all, keep in dialogue, identifying opportunities for the understanding and recognizing their interdependence on the other to resolve the issue, are hints of constructive attitudes offered by the author in “Negotiating at an unbalanced table”.

Phyllis guides each negotiator to identify the limit to remain at the negotiating table - when and how to withdraw. The other person's unwillingness to negotiate is a right he has, says the author. It's your problem, not his. After trying to use the resources mentioned above, which deal constructively with imbalance, leaving a negotiating table can be an act of courage, self-worth and integrity. And I would add: know your BATNA (Better Alternative to a Negotiated Agreement) and to identify alternatives that better address their interests, needs and values, assist in this nature of decision.

I think that all these recommendations from Phyllis to manage our passage through an unbalanced table can also be useful when we act as facilitators of dialogues, helping people to consider and use the attitudes mentioned by the author, aiming to take their best skills to a negotiation table, in a scenario of this nature. 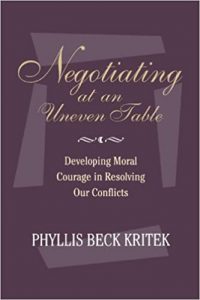 Trading at an unbalanced table - a practical approach to working with difference and diversity, Phyllis Beck Kritek
339 pages

* Tania Almeida - Master in Conflict Mediation and Facilitator of Dialogues between individuals and / or legal entities. For 40 years, she has been designing and coordinating dialogue processes aimed at mapping, crisis prevention, change management and conflict resolution. She is the creator and founder of the MEDIARE System, a set of three entities dedicated to dialogue - research, service provision, education and social projects.

Do you already know our free eBook series? check out on this link and good reading!

This website uses cookies to improve your browsing experience. Cookies categorized as necessary are stored in your browser, as they are essential for the basic functionality of the website. We also use third-party cookies, which help us analyze and understand how you use this site. These cookies will be stored in your browser only with your consent. You also have the option to cancel these cookies. However, disabling some of them may affect your browsing experience.
Required Always activated

Performance cookies are used to understand and analyze the main performance indexes of the website, which helps to provide a better user experience for visitors.

Analytical cookies are used to understand how visitors interact with the website. These cookies help provide information about the metrics of number of visitors, bounce rate, traffic source, etc.

Advertising cookies are used to provide visitors with relevant advertising and marketing campaigns. These cookies track visitors on websites and collect information to provide personalized ads.

Other non-categorized cookies are those that are being analyzed and have not yet been classified into a category.

SAVE AND OIL
Go to Top